First, I'm at Tiny's coffeeshop in the SE and they're playing music that is driving me freakin' batty! It's the crap that people call "music" where it's just a lot loud banging about. So. Annoying. That's not music, people, that's pounding on instruments incessantly!
Anyways...
Out in the blogosphere something called The Omnivore’s Hundred, a list of 100 foods that all omnivores should eat at some point in their lives, came about. Well, Hannah Kaminsky from Bittersweet liked the idea, but she changed it and calls it The Vegan’s Hundred instead! Everything here is either naturally free of animal products or can be veganized, and just like the original, these foods vary from the every day to extraordinary, delectable and disgusting. In her words "They’re simply all of the things that, in my opinion, any vegan foodie should definitely sink their teeth into at least once."

Your mission, should you choose to accept it:

1) Copy this list into your own blog, including these instructions.
2) Bold all the items you’ve eaten.
3) Cross out any items that you would never consider eating.
4) Post a comment here once you’ve finished and link your post back to this one.
5) Pass it on! 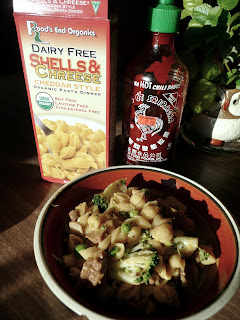 Because who doesn't like the comforting warmth and goodness of pasta with a cream sauce with veggies (to make you feel like you're eating something healthy) and a protein?? who, i ask??
I don't think I had tried the Road's End Organics brand before. I possibly may be lying. But if I am, it was years ago. I was at the People's Co-op shopping with my roommate when I saw the box that showed shell macaronis on it, and was, like, Must! Have! I really like shell pasta and you don't see it very often. I also picked up the new seitan in town, Cast Iron Seitan, made by Isa Chandra Moskowitz and her husband Justin. They sell it in bulk at People's (as well as local company Ota Tofu, Earth Balance and Tofutti Cream Cheese) for $6-something/lb. So as soon as I got home, I started sauteing up organic Oregon cremini mushrooms and diced seitan, steamed some organic broccoli and frozen organic peas, and boiled the pasta shells.
Now, don't expect it to taste like the blue box of mac n cheese. It's not the same flavor. (though I'm sure if you add enough salt, it may. b/c y'all know that cheese isn't real cheese. it's crap. like Velveeta) But it's comforting and I really liked it. I ate up the leftovers the next day. So I would say it serves two, but who would want to share?   :o)
Posted by Karla at 11:03 AM 5 comments: 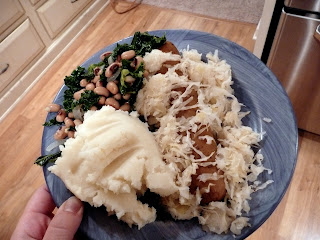 Every year for the past few years my family has made a particular meal for January 1st. I believe my sister started it. She found some recipe from one of Nava Atlas's cookbooks (the 5-Ingredient one) that has black eyed peas and greens and we found that we liked it a lot. We eat it every year with mashed potatoes, sauerkraut and some kind of fake brat/sausage.
I hope that 2009 will be a good year for me and for you too! Happy New Years! And definitely follow the link and try that greens recipe out!
Posted by Karla at 4:24 PM 6 comments: