So now I'm in Vancouver, BC. I've been here previously to visit a friend (and to go to Vancouver, of course!). My friend still lives here but he's currently on a long-ass honeymoon, so no hang out with him. It's nice to have a free place to stay. Especially when, on the first day, your car gets towed out of a spot that we thought wasn't reserved and you have to pay $100 for towing, $13 for a taxi to get to the car lot, and then plus a $60 parking ticket from the ImPark people. Yeah. Awesome sauce. But Corinn's working on getting at least the parking ticket taken off...Hopefully that works.
Anyways, when I left you last post I was still in Seattle for a couple more days. I went to the Victrola Coffee shop on 15th for another French Toast donut and coffee. I also went to Sage (former Hillside Quickie II or something??), which was only a few blocks from where I was staying. I got it to go so I could eat it in our apartment/hotel with some Dr. Pepper. I ordered their version of the Philly, called the Fremont Philly. It's made with seitan, which is my favorite "meat" to use for a Philly (though the tempeh version at my former workplace, Paradox Cafe, was my kryptonite for awhile). The menu said it was going to be $10, but it ended up as $11. Taxes? But why an even $1? I don't know. I do know it was the most costly sandwich I've ever gotten. Anyways, it did come with a side of rice. Not plain rice, but I couldn't tell you what exactly it was. It was all right. The sandwich itself was hella messy to eat, very saucy and sadly, not a lot of seitan. (DC Vegetarian kicks it's ass in every department) Mostly bell peppers and onions. Yeah. I wouldn't get it again and it's not awesome enough for me to tell you to even try it once. I want to hope that all of the ingredients are organic, so at least that's why it's so costly. 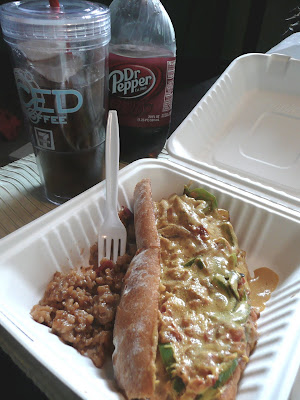 The disappointing Fremont Philly
That reminds me, the bread was damn tasty. But onwards!
That evening we went stopped at Grim's, a Capital Hill bar nearby, for Happy Hour. We had drinks in cute little mason jars and I got the Cauliflower and Hummus Crostini (it might have been cauliflower hummus...), which during Happy Hour is only $4.75 (instead of $7.50 or something). It was a great price for the 5 large crostini's we got. I'm not the biggest cauliflower fan, but it went well with the hummus and pickled/carmelized(?) red onions and cute chives atop.
After that, we stopped at Bimbo's Taqueria, which isn't worth much mention, and we went on to Moe's, which is venue Nuemo's attached bar. We were going there to see Campfire OK play at Neumo's. If you haven't checked out Campfire OK, you should. The Oddfellows Cafe video is the best. Moe's played great hip hop, I really enjoyed it, Corinn...not so much...
Saturday morning, we went to Wayward Vegan Cafe for breakfast before driving north to Vancouver. Again, no pictures...I got 3 sides: tofu scram, grits, and garlic greens. The greens weren't cooked enough for my liking and by the time I got them, they were about room temperature. The tofu scram was almost inedible because the amount of turmeric on them, I barely touched them. The grits were good. Nothing crazy good about them, just grits with Earth Balance, a little faux cheddar, and some salt & pepper. Corinn got the Monte Cristo, a huge French Toast sandwich with fake ham and turkey and served with some jam. It also came with homefries. If Wayward does anything, it gives the largest portions I've seen. I just wish the food came out of the kitchen better. The French Toast wasn't cooked long enough, a little soggy. Too much faux meat. The latter wasn't a huge deal, but the sandwich just was lacking in general. We did leave full though.
I'll talk about Vancouver on the next post...
Posted by Karla at 11:28 AM 2 comments:

I am currently in Seattle for a few days. There are a lot of Portland-Seattle comparisons, but the two cities are very different. I would say that I would never move here (oh, when I say never, I'm just saying if I had a choice between our two fair cities and I wasn't in a relationship with someone in Seattle...I wouldn't hate it, I'd prefer it to Asheville or Chicago or small towns...), just as someone here would say the same about Portland. Seattle is too city for my tastes. Too large, not as residential. The steep hills kill me (you would *never* find me on a bike here, you can barely find me on my bike in Portland). And the busses take your fare after you've ridden, not when you get on it...which ok, that one isn't a big deal, but for some reason I find it annoying. Also, the two bus drivers I came across were the least friendly bus drivers I've come across. It's population is definitely more diverse than Portland. You'll find a lot more older people here and it's more racially diverse. The feeling here in Seattle is less like you're on a college campus with your peers, which is what Portland usually feels like to me.
I'm here because a friend of mine has a work conference in a town nearby, so free hotel and gas. Tomorrow we leave to go on to Vancouver, BC, where my friend Corinn has never been. We'll be staying a friend's house, though he's out of town on his forever-long honeymoon (2 months, people! Turkey!).
The first day I spend taking my friend to her conference, then dropping her car off at Stingray Auto, to get her brakes fixed (p.s. right now they have a special where you get 10% off if you mention Yelp), walking back to the apartment/hotel where we're staying so that Qwest could fix the problematic wifi (which was stupidly just plugged incorrectly), going to Victrola Coffee on Pine, then getting lost when going back to Stingray to pick up the car. We had dinner at In The Bowl on E Olive Way, then hung out on Broadway and drank and ate sweet potato tots at Highline using my Groupon, and finding the bar 22 on 15th St. Good night. Here's some pictures of some of my happenings: 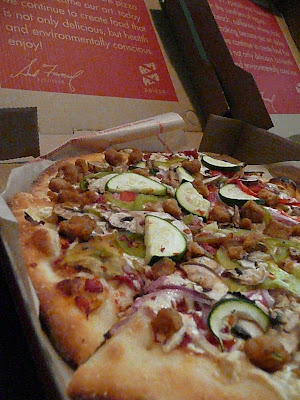 The Berkeley Vegan (minus tomatoes) from zPizza, I should've also gotten no zucchini, too raw for my tastes! Good pie though, better cold when the Daiya didn't stick to the roof of my mouth. 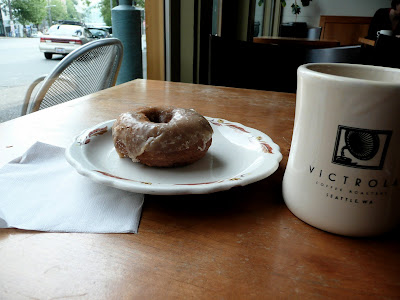 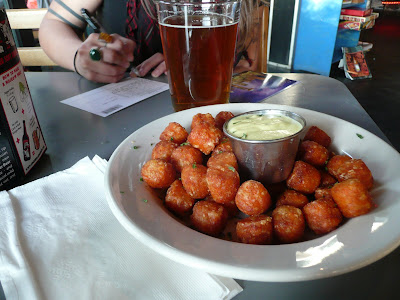 "Sweet Tots" from Highline. Corinn writing postcards in the background. 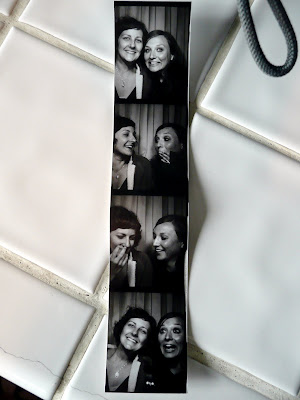 Photobooth at Highline. It takes credit cards only, which is kinda handy.