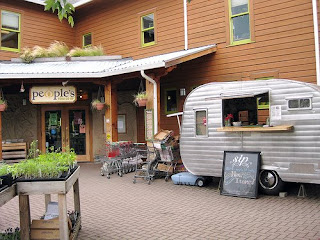 Picture stolen from Sip's Myspace
In front of People's Co-op in SE Portland you will find the cutest darn "food cart" you ever did see. It's an old, small Airstream and it's been around for about a year now serving all vegan, all delicious beverages. Most people are psyched about the vegan milkshakes, which come in many flavors such as Mocha, Chocolate, Peanut Butter, Cookies-n-Cream. They disappear during the winter months unfortunately so take advantage when you can. Last summer I had the Cookies-n-Cream one and I look forward to trying out the others.
If you're looking for something more on the healthy side you can choose from fresh juices and green smoothies. They also now have a parfait with locally made coconut yogurt, blueberry-almond granola, and local strawberries & blueberries. Yesterday I was [wo]manning the Herbivore booth at the Let Live animal rights conference and the nice Sip boy is here selling select menu items. Sadly, I missed out on the milkshakes, but I ended up getting the Greensicle green smoothie and it was delicious! It's a mix of kale, spinach, banana, vanilla, fresh orange juice, agave and ice. I think this is my first green smoothie and I think I'm kinda in love. It was a beautiful green color and it makes me feel like I'm being so good to my body.
I'm always happy to have more vegan options near me. My (vegetarian) friend asked me, after I told her of the new vegan bbq food cart, if I thought that the all-vegan cart thing was going to get overdone. That befuddled me because if a vegan cart is good, it doesn't matter, people will eat there. Some people have closed minds about vegan food and won't even try it (my friend Kenny has a story about how a guy came into his work -Trader Joe's- and a guy picked up a bag of the Vegan Chocolate Chip Cookies and then noticed it said "vegan" and was like ugh and then picked up a bag of the Chocolate Chip Cookies and Kenny then pointed out that in small print it states that those were vegan as well (if you didn't know, the difference is that there's nuts in the Vegan Chocolate Chip ones). The guy puts them back and leaves as Kenny calls after him that they're delicious and he should try them. They seriously are so good, they taste like Soft Batch, which were my favorite when I was young). But most people I know don't care, so long as it's good. Vegans are pretty insane about their food. They no longer take options for granted. You can eat just about anywhere as a vegetarian. Really. It's gotten to be very easy to be vegetarian. I think that's why I've taken to rolling my eyes at people that say it's too hard to give up meat. Those people don't want to, and they should just own up to it. Don't say it's hard, say you don't want to.
Posted by Karla at 2:21 PM 3 comments:

Argos is a band from D.C. I have no idea what they sound like, but my friend Becca is the singer and her friend B.K. plays guitar. They are playing tonight, Wednesday June 24, at Red & Black at 8pm. It's a free show and it's mere blocks away from Hungry Tiger Too so you get your $1 vegan corndog on before or after the show!
Even if you don't care for the music, still come and support R&B and get a TLP and/or beer/coffee, etc!
Posted by Karla at 9:47 AM No comments:

I did it! I made sausages! 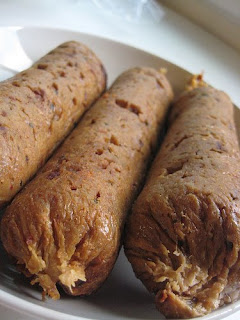 mmmm.....so faux-meaty....
Or perhaps I should say soysages? Actually, no, let's keep the word "sausage." As you may know -if you've been reading this blog or know me in real life- I love me some sausage: put it on my pizza, in my southern white gravy with buttery biscuits, covered in sauerkraut, simply grilled/heated and dipped in ketchup. Yum!
Several months ago, the wonderful Julie Hasson put up a recipe and a video for Spicy Italian Vegetarian Sausage. Ever since then variations have been popping up everywhere. Jess of GetSconed! has been making tons of them, from Cherry-Sage to Chorizo (both from Veganomicon). I was honored to be the recipient of a sausage every once and awhile when Jess let me try hers. Which definitely delays the motivation to do it myself.
Well, this weekend is my roommate's 30th birthday and we're going away on a camping trip with friends. I figured that this is the perfect time to try out my sausage-making skills...I mean, skillz. I decided to try Julie's original recipe. The instruction were simple and though I feel like my dough was wetter than it was supposed to be, the sausages came out wonderfully. I took a picture of them, but then I realized I could just use one of Jess' since they all look basically the same. I let them cool and then i removed them from the foil and cut them into rounds so that we can use them for our Stew Pockets (which is when you cut up a whole bunch of veggies, add a pureed soup and put the foil pocket in the fire to heat/cook).
Posted by Karla at 7:07 PM 3 comments:

Last week I finally got the book I've had on hold for at least a month, This Crazy Vegan Life by Christina Pirello. She's the host of a PBS cooking show called Christina Cooks. The book itself doesn't have anything really new for me. I've read it all before and I feel like this book was a bit on the boring side. I think it would be a good read for newbies, but there's other books out there that I prefer (The Food Revolution by John Robbins and Meat Market by Erik Marcus).
What her book did do was remind me of the annoying fact that less than half of all medical schools require nutrition classes for our future doctors. How is it possible that doctors don't have to learn nutrition?? That just seems so nuts to me. Our health depends on what we're putting into our bodies. There's studies all over the place about what foods effect (is that the right -ffect? I asked my friend Corinn and that's what she told me was right...so it's her fault if it's not...) your chances of getting certain cancers or prevents them. Of course, genetics plays into that, but it's a known fact that what we eat can alter things.
Ok, that's all my rant. Not a very good rant. But it's just something I had to say aloud....
I'm still job-less. I gave my resume to Sweetpea Lisa to give to her friend Wes of Blossoming Lotus. They're *finally* opening up their own location (they're currently sharing space with a yoga studio) and working there would be nice, I think. So far I have had no call backs for jobs that I've applied for. I would love to do something with food products, but I'm not sure how to find that since I don't know exactly where to look and what the options are. Something should just drop in my lap  :o)
I leave you with photobooth pics of me and my momma from my recent trip home for her birthday. 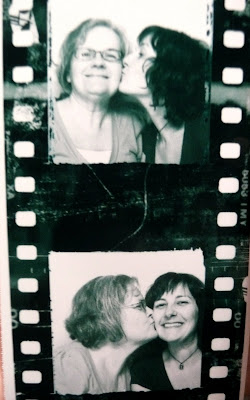 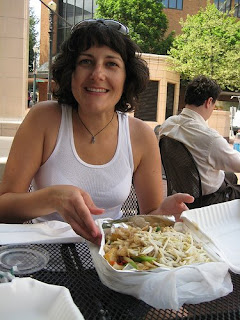 I love Thai food. No, really, I do. If you don't believe me, just look at that face filled with excitement! Jess, my "real job" friend (please don't ask me what she does, it's the Chandler of jobs and she has told me numerous times, but I still couldn't tell you if my life depended on it), invited me to come meet her downtown for lunch at a food cart, her treat! She suggested an Indian food cart, but i frowned at the suggestion. One reason was that it was 8:30am when she suggested it and another was that I had heard so much about Just Thai food cart and had loved what I had tasted of my friend's to go food. I also hadn't had Thai for at least a week. So she (gladly) gave in to my Just Thai request.
This isn't an all vegan cart, but they do have a vegan menu and they say they can make any of the other options veg on request. I ended up getting the Vegan Pad Kee Mao and Jess got the Vegan Pad See You. I was very pleased to see they also had my favorite soda, Dr. Pepper! So they get extra...points for that...if we're doing points.
They give an awesome sized portion for only $5! It comes in a biodegradable box lined with foil. It's kinda the worst packaging ever, the box becomes very unsturdy and I'd be surprised if you can eat the whole thing, but I like that they're trying to be better environmentally. I would just try to remember to bring your own to go box and they can put in there. Just remember to bring a big enough one! It's pretty much a must if you're riding your bike....you know, unless you like getting thai food all over your shit. (though I suppose you may be fancy and have a basket on your bike. oo la la)
Bottom line: Great food! Nice people (as far as I could tell, I spoke only about 5 words to her)! Cheap! It ended up costing me about $1.75 per serving, great deal!
Posted by Karla at 1:31 PM 4 comments: 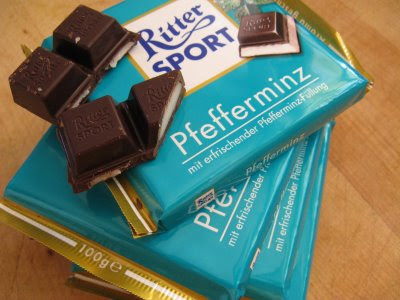 Ritter Sport is not the brand of chocolate I inhaled the most of during my year in Germany. I was a Milka girl. (The Sahne Creme had me wrapped around it's little nonvegan finger) But nowadays anything of Germany excites me and takes me be back to that year abroad. I had heard so many vegans exclaim over the Ritter Sport Peppermint bar. It's one of the few vegan options that the brand carries. The other being Marzipan, and there's a couple more I believe.
Mint has never been a big thing for me. I disliked it in my ice cream. I didn't much like mint tea. But then I start thinking about the mint things I do like: Mint gums such as Double Mint, Andes chocolates that I would get after an Olive Garden meal, I like it in my toothpaste with my cinnamon, Peppermint Patties, those red and white pinwheel mints you can get almost anywhere, and the best of all, Junior Mints. Geez, I do like mint! I might even love it....
For my birthday, Paula sweetly gave me a Peppermint bar. I didn't think too much of it, I was mainly surprised to be given anything at all. I forgot about it after putting it on a shelf in my kitchen and then after a few days in the 80s, I came across it. It had, of course, melted and it looked quite sad. I immediately put it in the fridge to firm it back up. A couple days ago, I finally broke into it. I was in the mood for something chocolatey and refreshing and it totally surpassed that goal. It was so delightful and delicious! The dark chocolate is of the nonbitter sort and matches well with the wonderful peppermint center. It totes tastes like a Peppermint Patty! I suppose if one would want to, they could make a tasty milkshake out of it, but I prefer to enjoy it naked. After all, I don't like mint in my ice cream!
Note: According to wikipedia the Peppermint one now contains butterfat, so check the ingredients before buying (if you're vegan, you're probably doing that anyways, we're a group of double-checkers....).
Image found via Google Image search, from this blog. Thanks, Amey!
Posted by Karla at 5:38 PM 5 comments: