Hey, guys!
I forgot to write what i ate and now i can't remember. but for the most part it consisted of:
Yogurt muesli or english muffin toasted with pb & homemade-by-my-roommate j
snack of raw almonds, red hot blues tortilla chips and pretzels
mixed baby lettuce with sunflower seeds and Goddess dressing
Boca Melt without the Melt at East Burn- comes with carmelized onions and mushrooms
French Fries
Beers
Cocktails
Coffee
Glazed Donut
Brussels Sprouts with Garlic from VWAV
Sauteed mushrooms, tofu, leeks and carrots with quinoa, Better Than Sour Cream and Srirachi
Yup....
Today was:
Yogurt muesli
Nachos from Hungry Tiger Too 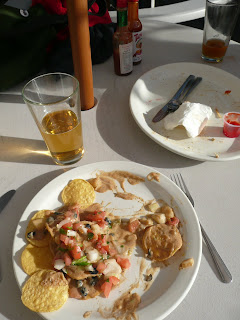 My roommate had the Portland Scramble and declared it the best scramble she's had out and about. And they have hash browns like Jam on Hawthorne, so that's a plus. I tasted the scramble and thought it good, but i thought the portion size of the scramble was quite small for $9. Seriously, i should have leftovers for that much....yeah, i'm having a serious issue with HT2's prices.....
PBR
dinner will probably be the leftovers of the veggie/tofu/quinoa from last night
Posted by Karla at 4:50 PM 1 comment:

Monday:
Yogurt muesli- Vanilla yogurt with rolled oats, banana, shredded apple, fresh squeezed orange juice, sunflower seeds, raw pumpkin seeds and flax meal. I love this stuff and make about one large container of it at a time. I started eating it while i was in Germany, they call it "muesli." I usually put some soymilk in it for liquid but i had an orange in the fridge that badly needed to be used.
Coffee with soy and sugar
Snack: Red Hot Blues chips, spelt pretzels, raw almonds
Tuno Casserole leftover with Srirachi
Pad Thai Woon Sen- yeah, i had it again
Tuesday:
Yogurt muesli (see above)
Roastaroma tea with French Vanilla Silk creamer and honey
Snack: Red Hot Blues chips, spelt pretzels, raw almonds
Tuno Casserole leftovers with Srirachi
3 (yes, three!!) Vegan Ham & Cheese sandwiches. I was going to stop at 2, but then Jess
just insisted i take one off her hands. So for her sake alone, i did.
1 Greyhound
1 Whiskey Sour
Tonight's America's Next Top Model! It's getting close to the end, which is kinda sad because that means there is an upcoming 3 month break between "cycles." Sad face.
Posted by Karla at 9:44 AM 1 comment: 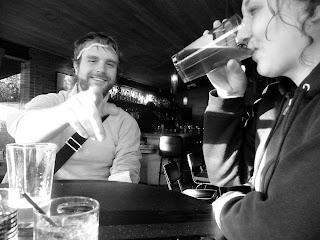 I had a great day with my friends Corinn and Philip (he lived here until a couple months ago, but he's currently visiting for 6 days) on Saturday. It was actually quite nice out and the sun was shining most of the afternoon. I actually got to wear just a T-shirt (and jeans) when we sat outside the Gold Dust Meridian for a drink. Well, until the sun sneaked behind the building across the street...then it got cold and we went inside.
I slept in quite late on Saturday so my first meal was lunch.
Pad Thai Woon Sen
Dr. Pepper
Coffee with soy and sugar
Ginger ale and Gin with lime
1/2 Meatball Sub and Brussels Sprouts from Bye & Bye
Nebraska- hot apple cider and apple cinnamon rum
Stockholm- lemon infused vodka with ginger ale
Session
Pad Thai Woon Sen leftovers
By the way, all that alcohol was within an 8 hour period so i wasn't obliterated at the end of the day, if you were wondering.
Then on Sunday..
Bite of bagel that may or may not be vegan. My roommate was trying not to starve to death (b/c of our friend philip's lack of speed to get ready for breakfast) and was eating one of her Kettleman's bagels that she buys in a mix bag. i took a bite and was like, that's a pizza bagel. that's probably not vegan...
Coffee with soy and sugar- $2.25 a cup at Junior's! yowza! that's almost as bad as Zell's! (i'm pissed at them b/c they charge $2 but 50cents more for soymilk.)
Vegan Potatoes from Junior's- i'm not sure why i get these since i'm not a fan of their potatoes. Ok, actually i do know why i get these, i'm a sucker for corn, mushrooms and their spicy tofu sauce. But, really, their potatoes kinda suck. And the only person that doesn't agree, that was in our party, is my roommate.
Homemade Tuno Casserole- i've had a frozen tube of Tuno (R.I.P.) for at least a year and i've been wanting to make a tuna casserole with it. My roommate and i topped ours with our respective hot sauces, her Aardvark and me Srirachi. It was comforting stuff. I added peas because what's any casserole without peas??
Southern Blend Greens (from Trader Joe's) with garlic and olive oil
Trader Joe's Soy Creamy Very Cherry Chip ice cream
Posted by Karla at 10:12 AM 6 comments:

So yesterday. (just assume that anytime i mention "sausage", "yogurt", etc, it's the vegan version of them)
At work i ate:
Tofurkey Smoked Turkey Sandwich with Veganaise, lettuce on Dave's Killer Bread
Spinach hummus (this stuff is so good! it's that brand that you can find in all the fridgerated section of almost every grovery here) with organic blue corn chips
Plain yogurt mixed with rolled oats, the juice of a small blood orange, pumpkin seeds, sunflower seeds, raisins
Chocolate silk milk
I got home and me and my roommate went to Hungry Tiger Too. They have a separate vegan menu now. It's nice to have but they've upped some of the prices *and* they make you pay a $1 (for crinkle french fries) or $2 (tots, salad, or soup) extra with your sandwich. Wtf??? Who do they think they are, McMenamins?? So they prices are technically the same, except you have to pay more for fries or tots.....You're free choices are chips or coleslaw. The secret vegan club sandwich is on the menu, but it's now $10.50 (and, again, you have to pay extra for tots or fries......so you would have to pay $12.50 (!) for a club with tots.......), it was $9.50ish before. They do now have homemade corndogs, which is what i ended up getting. I knew it was bad idea though. It's 2 of the corndogs on a bed of tots for $7. Who can eat all that, i ask? It's too much grease. I about died. The corndogs were good though. I asked the waitress if it's possible to get a half order, b/c i only need one corndog at a time, thanks. She said she didn't think so but she would mention it to someone. The shitty part of our visit was that there was a table of about 12 people and they were kinda drunk (i think) and they were talking so loud and shrill, it hurt me and missy's ears and we could just barely hear each other.
I also had a PBR to drink there.
I went to a show and i drank a gin and giner ale.
After the show i ran into my lovely friend Philip, who had just gotten into town for a week long visit and we went and had a beer at Squeez. I had a Shock Top Hefeweizen.
And that was my day.....
Posted by Karla at 5:49 PM 3 comments:

I've been thinking of doing a food journal of what i eat each day. That would actually get me posting more (because that's what y'all are dying for, right?) b/c it's easy. I thoroughly enjoy looking at what people eat. Not even looking, just reading about it is fun. I work for a naturopathic doctor and sometimes she gives people a diet to follow and i just like reading it. It's not even meals to make, just a list of foods to eat or avoid. And sometimes patients send in what they've been eating each day and i read them. I don't know what it is about them that i like so much.....
So, so far today i've had:
Maple Sausage Waffle from FlavourSpot
Coffee with sugar-in-the-raw and soymilk
Yeah, that's it. I haven't gotten very far today....
Posted by Karla at 12:00 PM 1 comment: