It's the third year of Vegan Month of Food. This is when blogs from all over tarnation write about vegan food (anything relating to veganism really) for a whole month. It starts October 1st and the goal is to blog about 5 times a week. I did this last year but only ended up writing 12 posts. I always start with the best intentions but then totally slack. Kittee has started a public RSS feed to keep up on them all. So far there is 265 participants, so you'll have tons to read! Most likely we'll have stuff to read for months to come.
If you want to do it, just click on to the Kittee link and tell her! There are threads on the Post Punk Kitchen (PPK) with ideas on what to blog about.
Posted by Karla at 4:46 PM No comments:

A few months back I remember thinking, Man, I wish I could get some vegan BBQ! And, seriously, only days after I found out about Homegrown Smoker, an all-vegan BBQ "cart." It's current location is outside on a lot on NE Alberta and 23. It will be moving 4 blocks east next week, or something, where Spud Locker was. They promise there will be a covered area and heat to protect customers and workers from the winter time chill.
It has taken months for me to get there, but it's definitely been on my mind. In the beginning they didn't have smoked tofu, so I mentioned it to them on their blog and a few weeks later I noticed they had added it to their menu. I'm not going to say it's because of me that they have it, but, yeah, I'll take the credit...
So finally I made it there yesterday. Me and my vegan friend Kenny went for lunch. We both got the 2 protein/2 sides that comes with a piece of gluten free cornbread. I chose smoked tofu, soy curls, mac-no-cheese and beans. Kenny got tempeh ribs, chipotle sausage (I believe that's from Field Roast), cole slaw, and beans. We shared so that I got to try the stuff I hadn't gotten (except the sausage, which I didn't care to try) I had heard bad things about the Chronic Tempeh Ribs, that they were too dry, but they were great! Perhaps they've worked on the dryness factor, but I thought they were tasty.
The coleslaw was good, nothing very exciting. I think I prefer the cole slaw from Hungry Tiger Too though.
As for the soy curls I had heard such good things about, they lived up to their fame. Yum! Another nonvegan friend got them and was questioning their veganness, saying their texture was very convincing.
The baked beans were....baked beans. No real excitement. Perhaps if there was fake bacon involved they would get more exciting, but they were fine...just nothing to write home about.
I LOVED the Mac-No-Cheese. Some people had mentioned it was dry, but I guess I got a good batch because they weren't too dry, weren't too sauce-y. They were totes Goldilocks style, just right. I can't tell what's in there, but it's some good shit.
Smoked Tofu.....sigh....This made me sad. I had high expectations for this. The outside looked well smoked and they put BBQ on top. Unfortunately, the tofu innards hadn't been touched by the heat. The tofu must not be a very firm kind. They probably use Ota, a local company that doesn't make Extra Firm (how come that's not as common out here in the Pacific Northwest??). It was a bit mushy in the center and very white still, so if it was marinated first, it hadn't gotten to the center of the "steak."
The Gluten Free (I should add that a lot of their stuff is gluten free, look on their site for more info) Cornbread was all right. They use flax seeds, which you can plainly see since the brown specks are all through it. I would suggest they use golden flax seeds. I just think it would look better and more like cornbread. It kinda looks like banana bread.....It was good, there was no graininess like a lot of gluten free stuff tends to be. 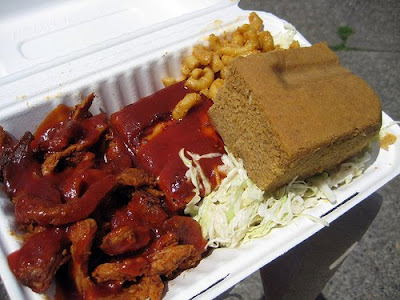 Old Picture from Get Sconed Jess (cornbread looks different now)
I was very sad because they were out of the Stuffed Jalapenos. Those sound sooooo good! They also have corn on the cob with a special butter blend, frito pie, Macnochirrito...or some such crazy burrito combination.
I definitely hope to go there again soon. Get me some more Mac-No-Cheese and Soy curls.....yummm.....
Posted by Karla at 2:39 PM 3 comments:

Vega brings all the boys to the yard...

Well, holy crap! I haven't posted in September yet. Where does time go? Summer's just about over and I'm really ready for fall. I think. I'm sure when fall actually does start it's thing I'll be yearning for the sunny, warm days of summer. And, sure, I'll be hatin' laugh come winter. But then again, I always go home for Christmas (and hope this year isn't an exception), which is in Florida.
So I was asked by the Vega people if I wanted to try out there smoothie nutrition powders. At first I hesitated. I'm not big on those powders and I don't make smoothies that much. I always have frozen banana and other fruit in my freezer, but for some reason the idea of making a smoothie in my easy-to-use-easy-to-clean Magic Bullet just never seems like fun. There's a mental block there and I haven't found a way to get around that.
In any case, I decided I would like to try them out. For future reference, at least. Who knows, maybe I would fall in love with it and actually get into making smoothies. My friend Corinn has been making smoothies a lot and has been using a rice protein powder, so I thought she'd be interested in trying the powder with me.
I was sent packets of Vega's Whole Food Smoothie Infusion and a booklet with recipes with various ways of using it. I made a green smoothie with mine, but I only used a half packet because I already was using greens in my smoothie. It wasn't awesome, still had that slightly chalky flavor that protein powders have, *but* it's definitely the best one I've ever had. It wasn't as Smarties-tasting as the VegLife's Supreme Meal is. The girl from 'Awesome.Vegan.Rad.' (<----love this blog) used the brownie recipe they gave and made her own adjustments to it and said they were great. It seems like an excellent way to help you pretend that brownies are good for you. It's like when I put pom juice in my cocktails....
Corinn told me that she liked the powder as well, by the way. 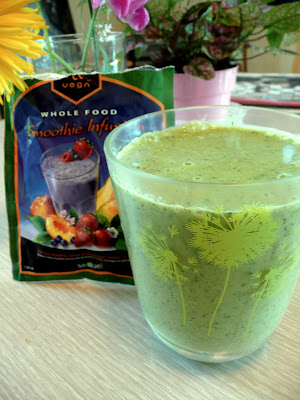 Greeeeeeen Smoothie
I mixed it with orange juice, frozen banana, a little agave, teeny  bite of vanilla extract, spinach and kale.
Posted by Karla at 10:43 AM 1 comment: